Target China, 6 December 2018. This is an extended update of a timely 19 March blog by Cyril Chen and Crystal Chang. The ‘two sessions’ refers to the annual plenary sessions of the National People’s Congress (NPC) and the National Committee of the Chinese People’s Political Consultative Conference (CPPCC, an advisory and consultative body), both held in March each year. These twin recurrent political events both reflect and guide trends in China’s foreign trade.1

Minister of Commerce Mr Zhong Shan sums up the approach of the Chinese Government to five aspects of foreign trade, where inefficient practices are to be discarded in favour of better methods. The first is to optimise the international trade situation, including the smooth flow of ‘One belt one road’ trade across the path of the ancient Silk Road, and generally to promote trade liberalisation and broaden trading partner networks: to make ‘a bigger trade cake.’ Second—and very attractive to Australian firms—is the ‘huge potential for foreign trade’ of the central and western regions of China, which account for 45 per cent of the nation’s economic aggregate but only 15 per cent of China’s imports and exports.

Point (3) concerns innovation in trading bodies. Point (4) relates to optimising commodity composition, where ‘there has been a shift from resource- and labour-intensive to capital- and technology-intensive exports’ in recent years.2 In Mr Zhong’s words, ‘China is to build a good image of Chinese brands and Chinese quality in foreign trade.’

The fifth aspect, a Chinese Government initiative to optimise forms of trade, is likely to involve Western companies: 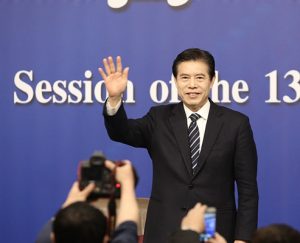 From 1 July 2018, import tariff rates for imported consumer goods began to be reduced from 15.7% to around 7%.4 Under the China-Australia Free Trade Agreement (ChAFTA), which came into effect in 2015, tariff rates for Australian imports are substantially lower, and will drop further from 1 January 2019.5