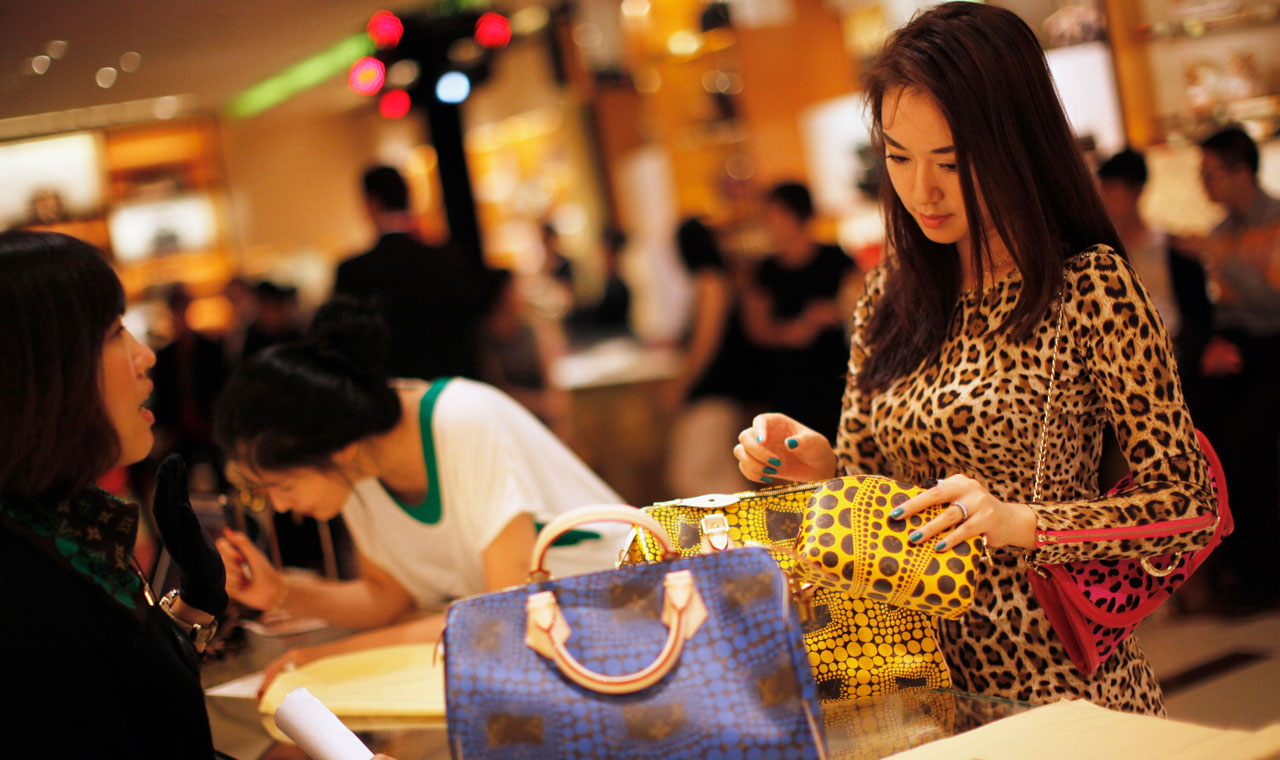 The rise of “Her Era” in China

“Her Era” and opening female-targeted market has become a popular topic within the Chinese businesses community during the recent time period. Along with the expanding of Chinese female’s status and their rapid increase in consumption ability, the female market in majority areas has exceeded male’s market, becoming one of the main decisive factors in enterprizes and product development direction. The reasons for the formation of this situation include China’s cultural background, improve in women’s economic ability, family financial mastery and national policy guidance.

Cultural background
Although feminism is not universal in China, Chinese women almost obtain equal social status to men, and in certain areas, female may even be stronger than male. This is due to the policy of one-child policy in China leading to every family to treat their only child with equality and care. With girls obtaining physical weakness this instead leads to a higher attention from family and society. Also due to the contemporary culture in China, men are considered to be more responsible and accountable while women should be more protected. Further views and discussions include “men are to support financial capital and women are to spend the capital”, therefore in China, men obtain a much higher production capacity, however, has a lower consumption ability compared to women.

Financial ability
Official data from China government shows, in 2016 women who participate in full-time employment obtains the proportion close to 67%. This percentage is still lower than male which is 79%, however female business leaders under 35 years of age obtains the proportion of 51% (female business leader above 35 years of age only obtain 16%). 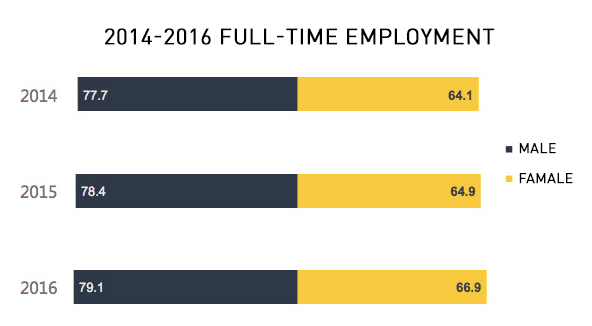 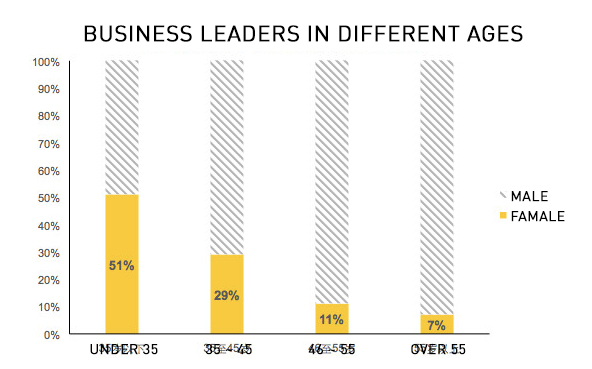 This is due to the improvement of the educational level of women and the strengthening of awareness of equality between men and women, gender is no longer an obstacle of work. Female’s increase in business status directly led to the improvement of women’s economic capacity, which is also one of the important reasons for the prosperity of the female market.

Family Finance
In the Chinese family, majority women are in full control of family finances and dominate household consumption. According to Target China’s survey data, in 85% of Chinese families, women not only manage their own income but also manage men’s income. This means that in a family women are who is aware of the information and total of finance with men having weak awareness of any information. Women also decides the daily consumption of the family whether for use, wear or eat. For “travel”, women’s decision influences on the purchase of transportation, especially for consumption of cars over a hundred thousand which will normally be decided by the female. In addition, apart from the expenses of family essentials, women’s consumption in luxury products are much larger than men and present a larger growth trend.

Policy guidance
As China’s export share in recent years continued to decline, expanding domestic demand become one of the important strategies to save the economy. The main strategy includes the expanding in female market, stimulate more women to spend. Businesses are also increasingly becoming aware of the significance of the female market. Apart from traditional female industry such as fashion, cosmetic etc, the original male-dominated industry also began to tilt toward females such as sporting equipment, electronic games, and etc.

Power of “Her Era”
According to China’s largest e-commerce operation Alibaba Group’s research data, it shows that currently the size of mainland women’s economic market is nearly 2.5 trillion yuan, to 2019 the economic market is expected to reach 4.5 trillion yuan. Comparing to male consumer community which obtains a more stable aesthetic view, women are more willing to accept new products and experiences. In the situation of female consumption goods rising by years, compared to male, female consumption has a lower concentration but are balanced and diverse. Female is a significant driving force for the diversification of consumption. 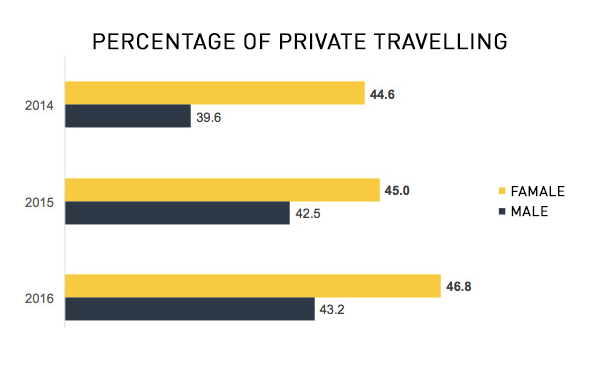 In addition, the independence of women in travelling is also growing. From 2014 to 2016, more women participated in private travel, obtains a higher ratio to men. From 2016, 46.8% of female indicate the participation in private travelling throughout the recent year whereas the male only obtains the ratio of 43.2%.

Self-education consumption
Apart from spending on shopping and travel, women’s independence is also reflected in the rising on self-education spending. Although this expenditure is still lower than men, in time the difference between them continuously decreases. In 2016, women are expected to spend more than $ 4,500 yuan on education and training in the coming year which is only $48 yuan lower than men. 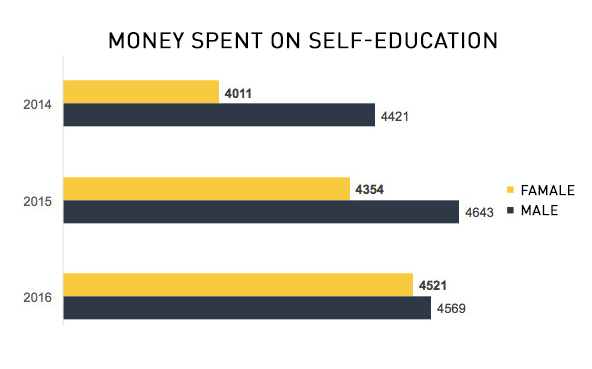 In addition, in 2016, the proportion of women who plan to process hobby and talent training in the coming year reaches 67.2%, much higher than men’s 33.8%. This demonstrates that women are not only more diverse in material consumption but are also willing to experience in mental consumptions.

For Australian companies willing to expand its Chinese market, Female is one of the most significant market factors to be aware of. However, due to cultural differences and other reasons, Chinese women’s preferences may be different to Western cultures. Therefore, before processing promotion of product to Chinese female, seek market planning companies with strong Chinese background such as Target China for consultation toward the characteristic and preference of Chinese female’s market, this surely lead to an extreme increase in the probability of success in the promotion.