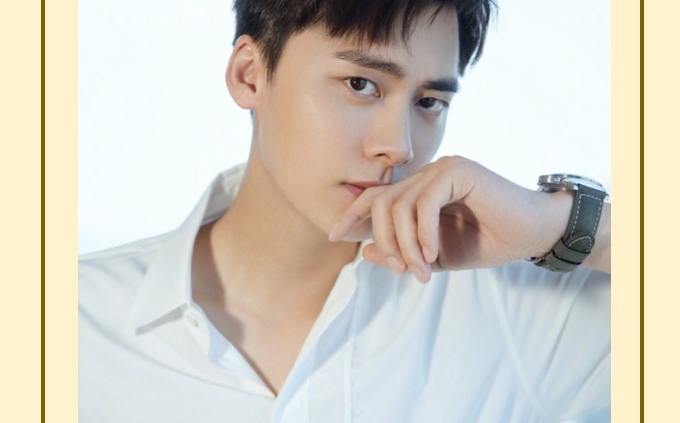 1. Song Jia: a well-known actress in Mainland China, who has starred in many high-recognition movies; played a successful career, mother Nan Li in the drama “Little Will”; follow-up will be broadcast stable output, dominating the screen for a summer! Works to be broadcast: “Sunshine Robber” “1921” 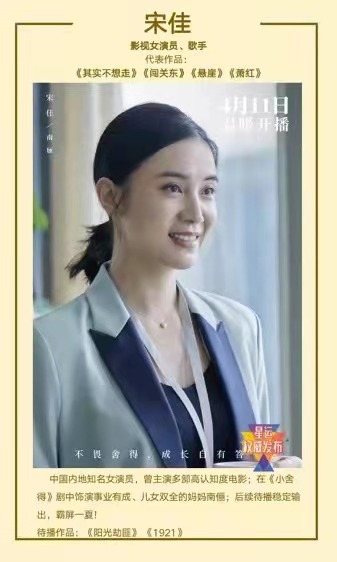 2. Tong Dawei: a well-known actor in Mainland China, many of the starring works “Struggle”, “Chinese Partner”, “Tiger Mom Cat Dad” have been rated very high, and the word-of-mouth evaluation is very high; this time he played with his family in the “Xiao She De” play Xia Junshan, the father who decided to give the child a happy childhood. Works to be broadcast: “Emergency Rescue in Our New Era”, “Top Secret”, etc. 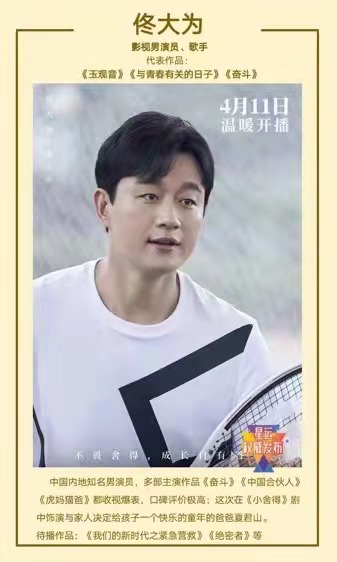 3. Jiang Xin: A well-known mainland actress, starring in the works of “Seven Fairies”, “Zhen Huan”, and “Ode to Joy” are all high-quality works with both ratings and word-of-mouth, representing roles that are deeply rooted in the hearts of the people; in “Little She De”, she plays Tian Yulan who is a good son. , The play has been broadcast and aroused widespread discussion. Works to be broadcast: “Dream City”, “Merchants”, “Goodbye That Day” 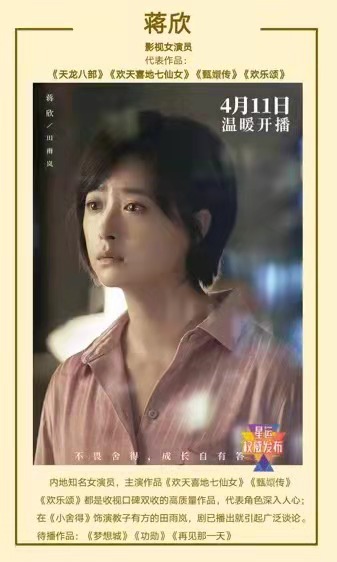 4. Li Jiahang: The mainland actor, with the humorous and humorous civilian lawyer “Zhang Wei” in “Love Apartment”, made everyone remember, and continued to appear in the series of works; in “Little Will”, he partnered with Jiang Xin and played Tian Yulan’s husband A corner of Yan Peng.
Works to be broadcast: “We Are Young”, “Nude Raising”, “Children of the Qiao Family” 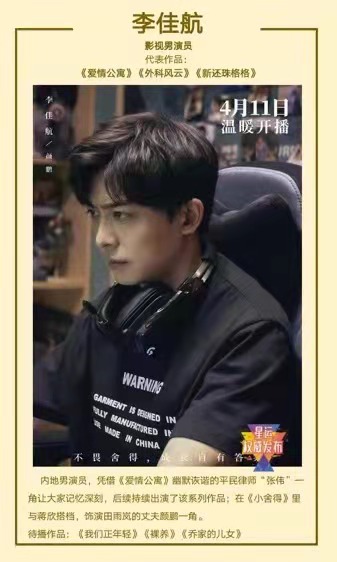 5. Zhang Guoli: Chinese actor, director, producer, host, member of the National Committee of the Chinese People’s Political Consultative Conference; debuted in 34 years, starred in a number of well-known works, is a national first-class actor; this special starred in “Little Will”, Worth looking forward to
Works to be broadcast: “Smell of Smoke”, “Strong as a Rock”, “Mobile Phone 2”, etc. 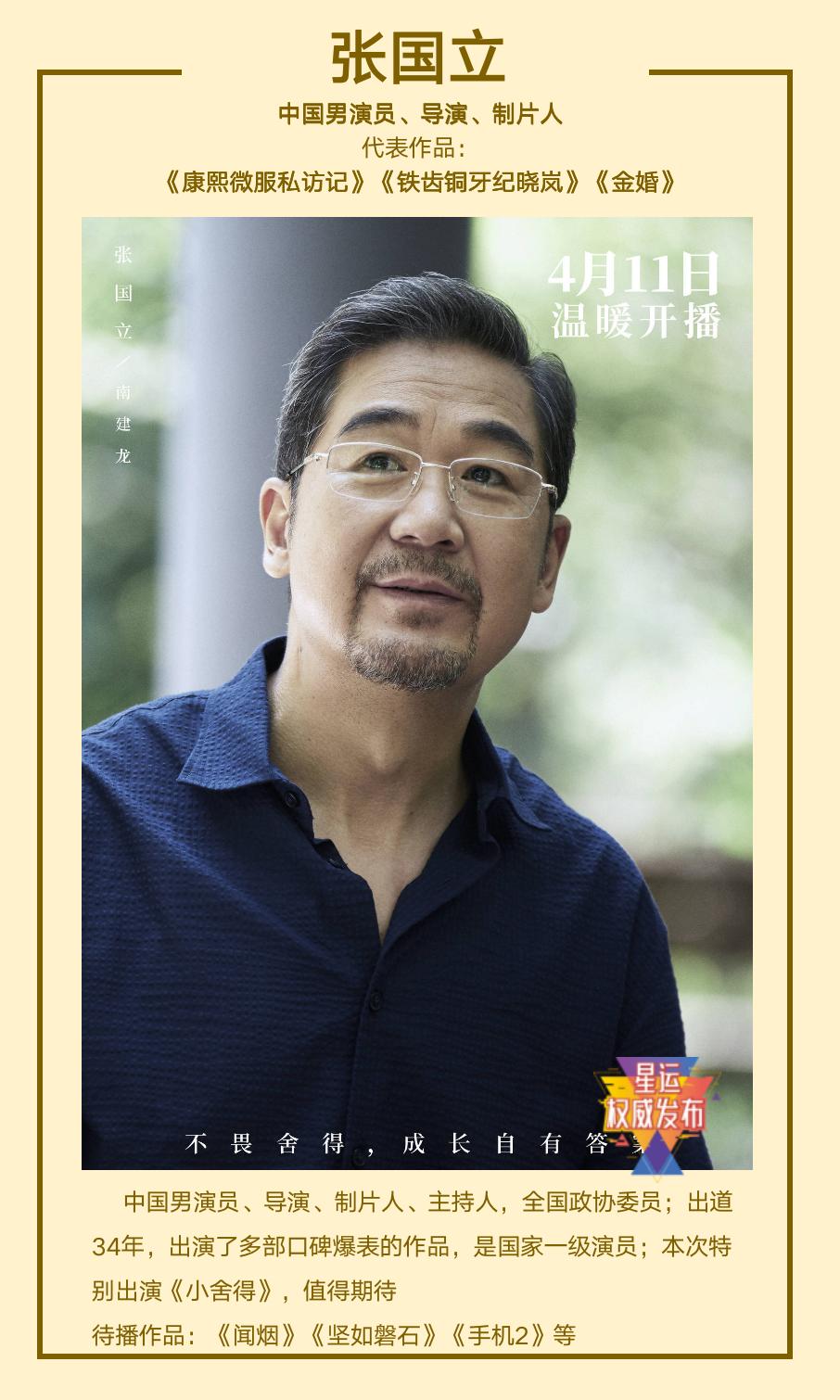 6. Wu Yue: Chinese film and television actress, “The First Half of My Life”, “The First Half of My Life”, “Daming Fenghua”, “Elite Lawyer” and other word-of-mouth dramas have appeared. More follow-ups will be broadcast, stable output of works, quality guaranteed.
Works to be broadcast: “Sweeping the Dark Storm”, “The Perfect Clothes”, “Tiankeng Eagle Hunting”, “Myth of Love” 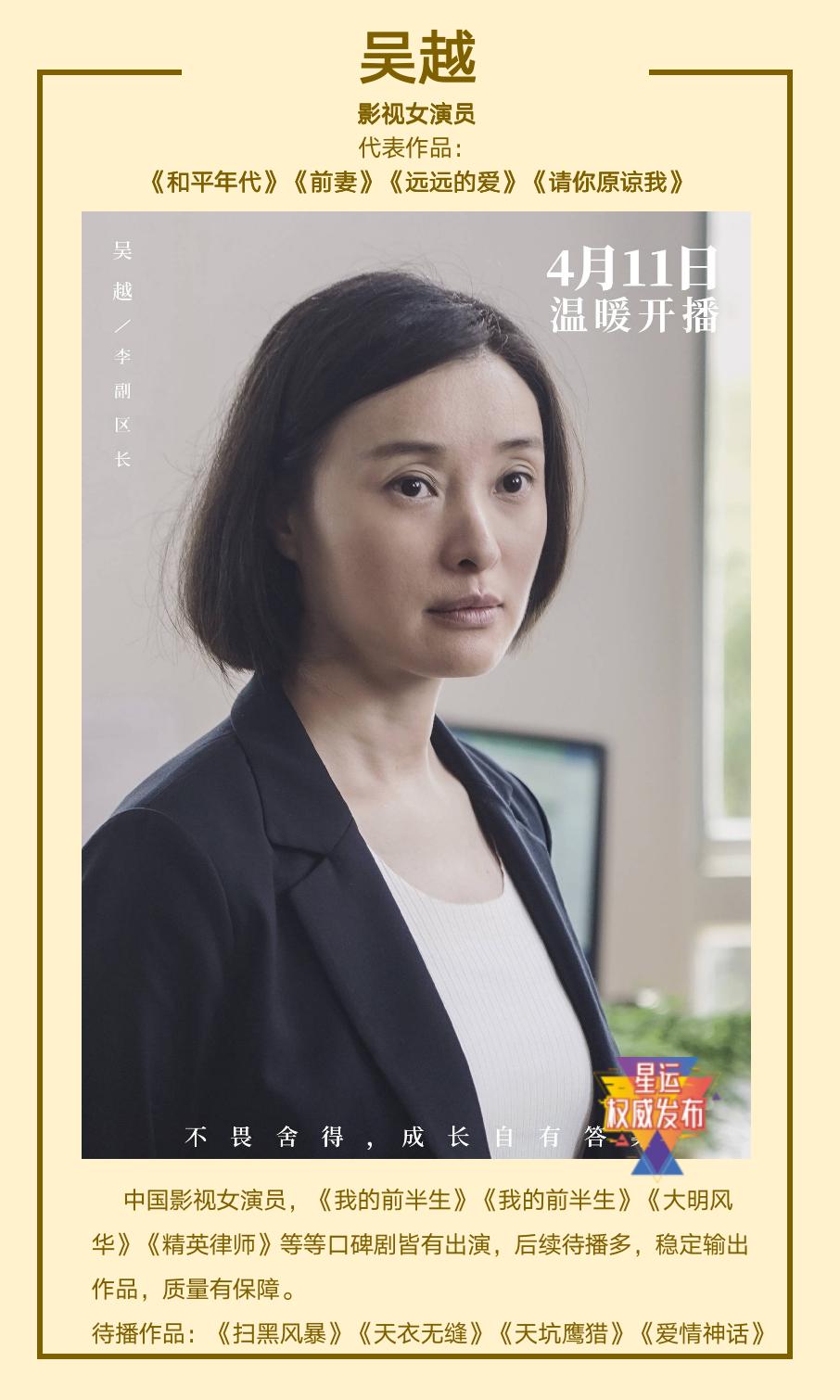 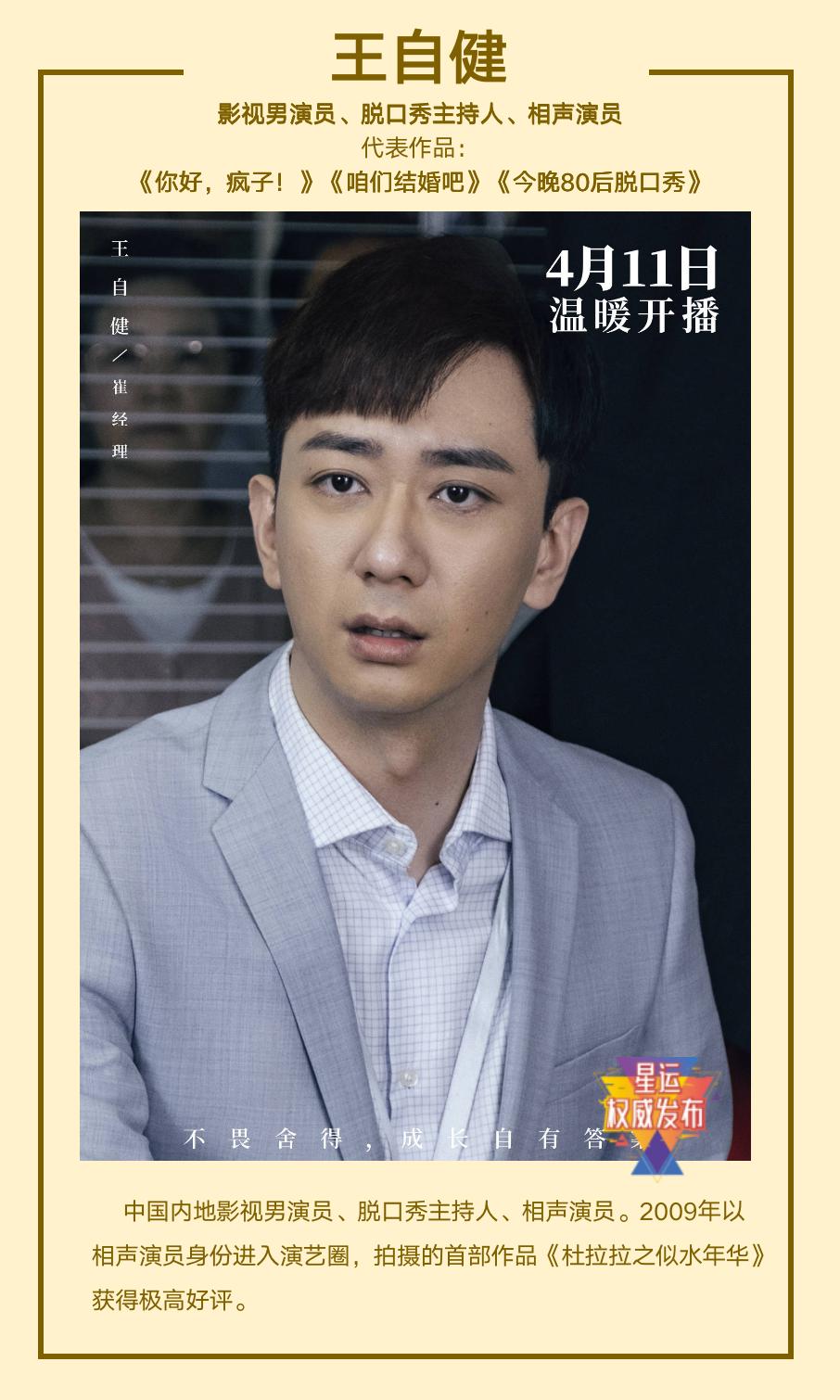 8. Wu Yufang: Chinese powerful actress, 39 years in the industry, starred in a number of high-reputation works, has a wide range of dramas, and has the courage to try female roles in different environments and different personalities. She plays Liu Qiaozhen, a rural girl from northern Shaanxi who has a great contrast with herself, and has become a classic image in Chinese film women’s galleries. 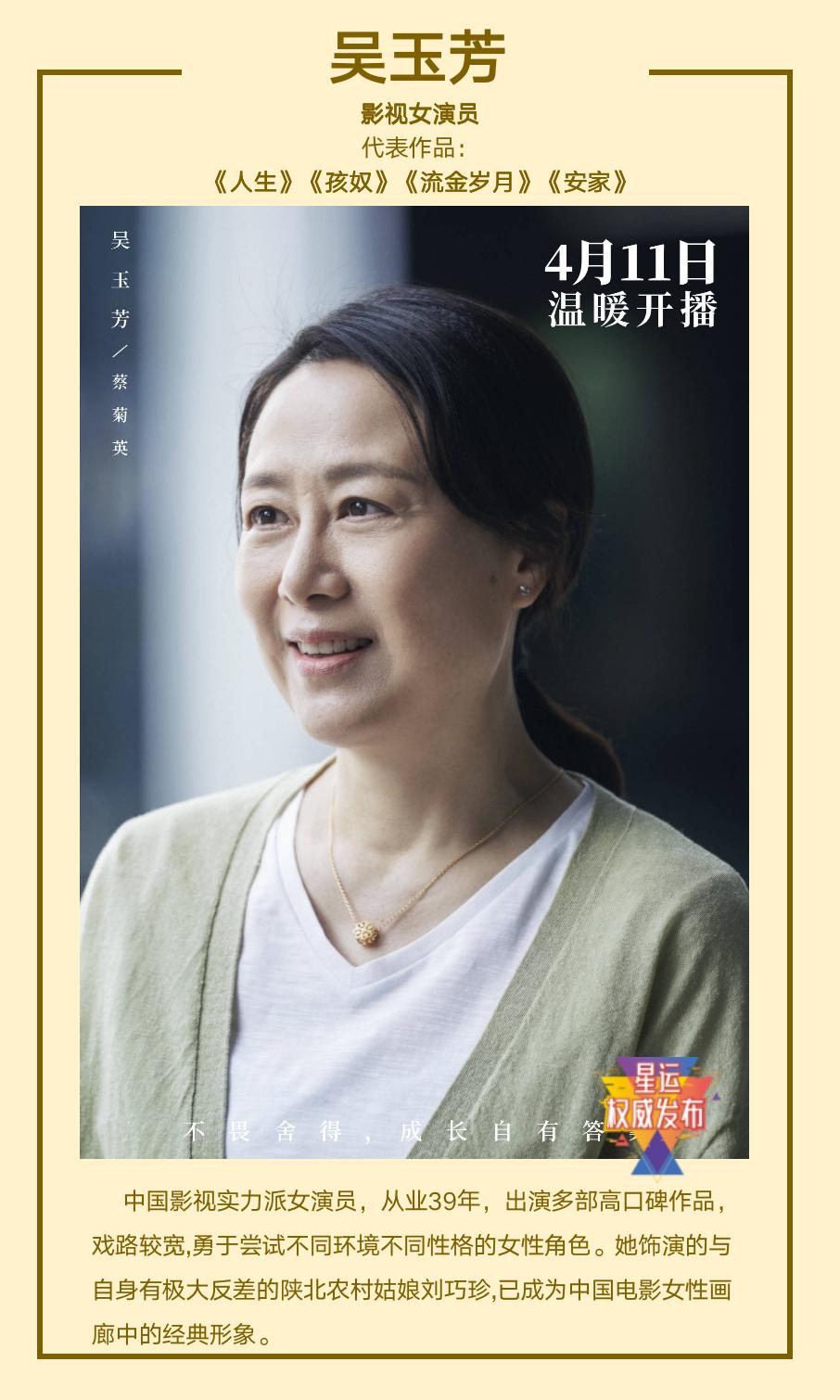 9. Zhu Yin: A powerful Chinese actress, a professional mother in film and television dramas, her acting skills are naturally sincere, and she can portray the characters very well in a short appearance. In the 1990s, with a “Wife from America”, it won a series of top awards in dramas such as “Plum Blossom”, “Mandarin” and “Golden Lion”. 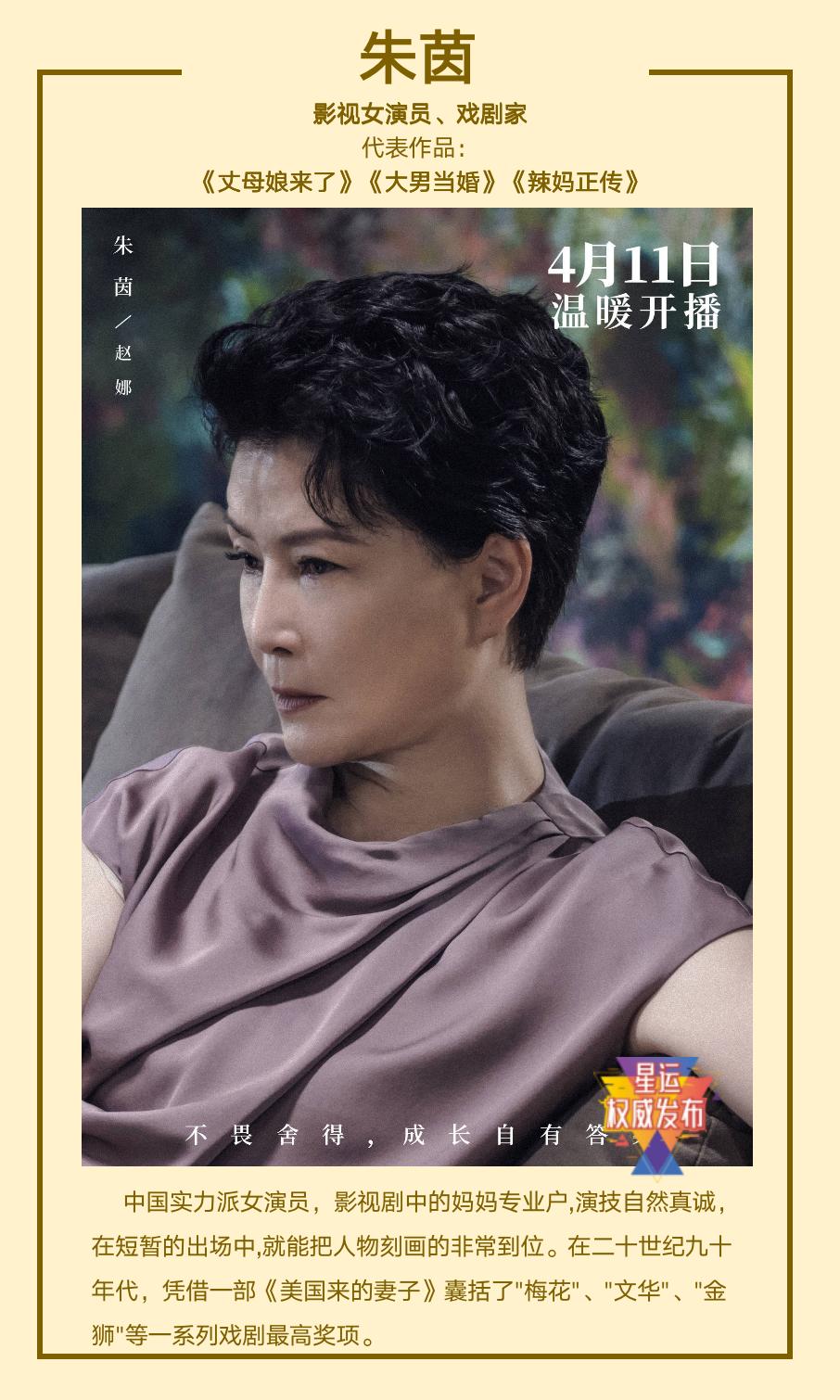 10. Bi Wenjun: One of the members of NEXT, with high-value, tall figure, outstanding temperament, youthful and full of vitality, frequently published on the cover of fashion magazines, fans cover young groups and strong stickiness, and there is more room for follow-up development. “Neon Clothing” will be broadcast soon. 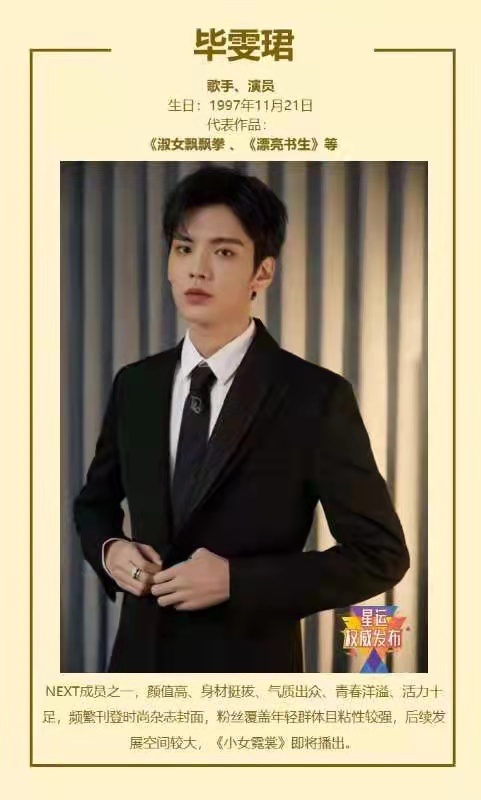 11. Tan Songyun: She is the lively and cheerful Yuan Jinxia in “Under the Brocade”, the quirky Li Jianjian in “In the Name of Family”, and the full-fledged Ma Xiaoxiao in “Dear Mayang Street”, recently appeared The platform promotion meeting of the new drama “Please call me the director”, the black trousers and the white suit jacket are elegant and capable. 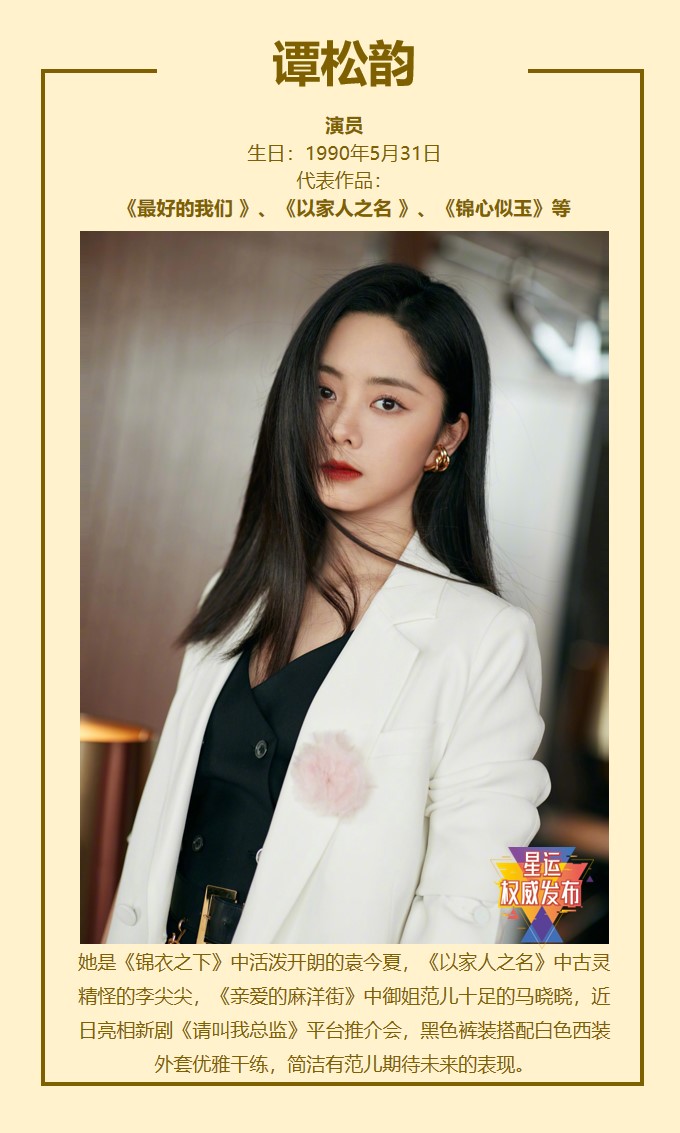 12. Li Yitong: “Li Ge Xing” is currently being aired. With Xu Kai, the popularity and topic level continue to increase, and personal popularity and commercial value increase. The follow-up “Ideology Illuminates China” is worth looking forward to. 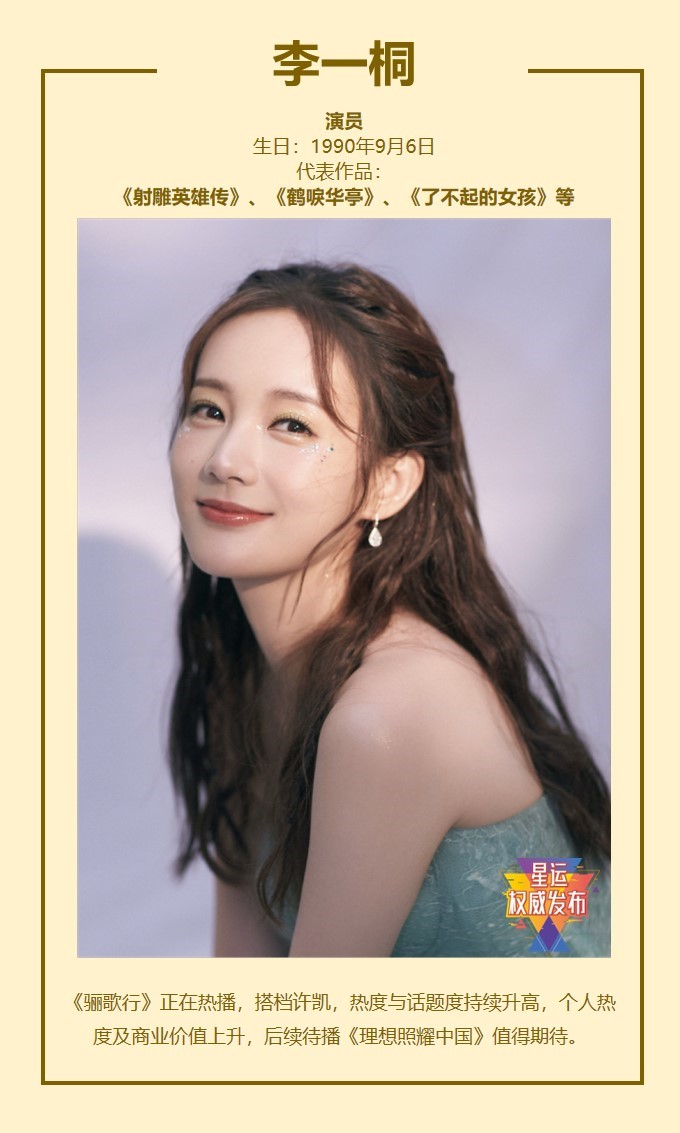 13. Spicy Yoko: Confident and funny, her cute appearance has her own affinity, a cheerful and lively personality, a positive and blessed image that is loved by the public, and the follow-up will be broadcasted “Yulouchun”, “Daughter of Tang Dynasty” and “Miss Qi Many dramas such as “Wish it” are worth the wait. 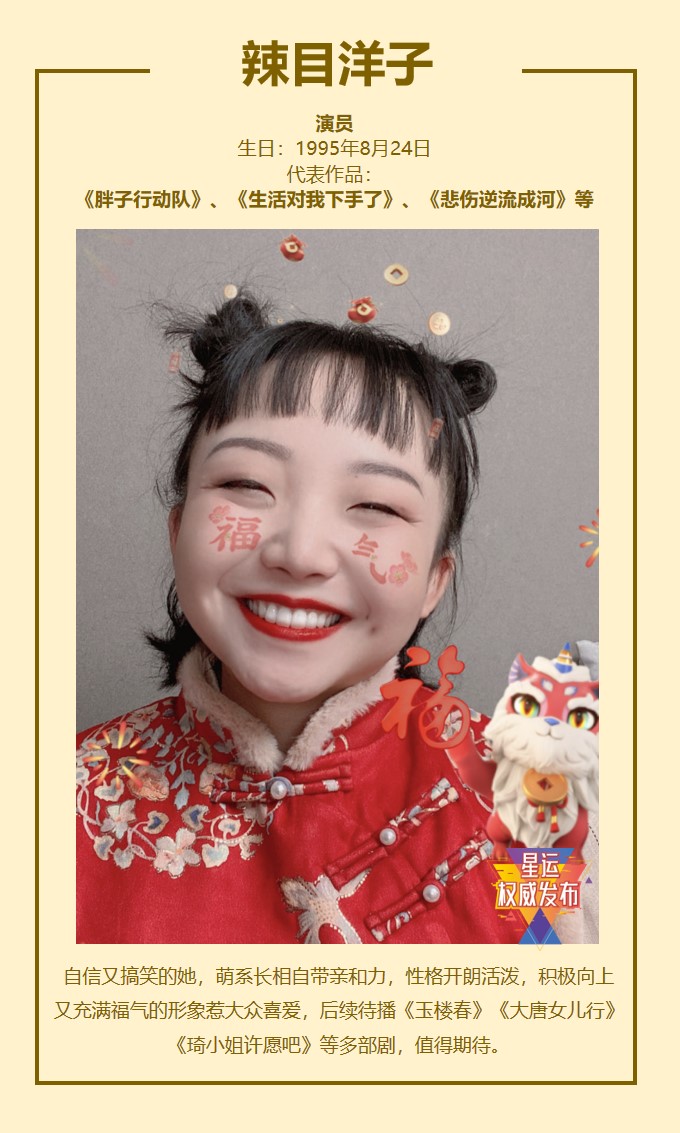 14. Chen Xingxu: The first Rocket Army TV series “The Trumpeter is in Place” is currently on the air. With Li Yifeng, the show does his best to show a tough military style. The quality of the show is hard-core, showing Chinese power. Looking forward to follow-up which performed. 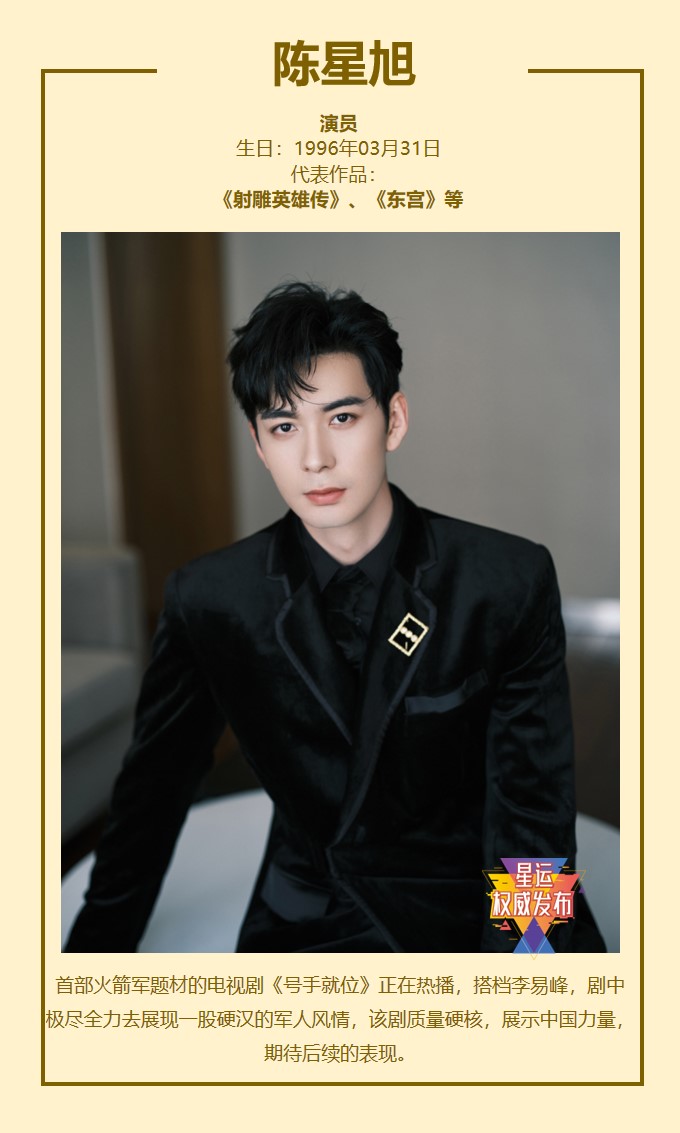 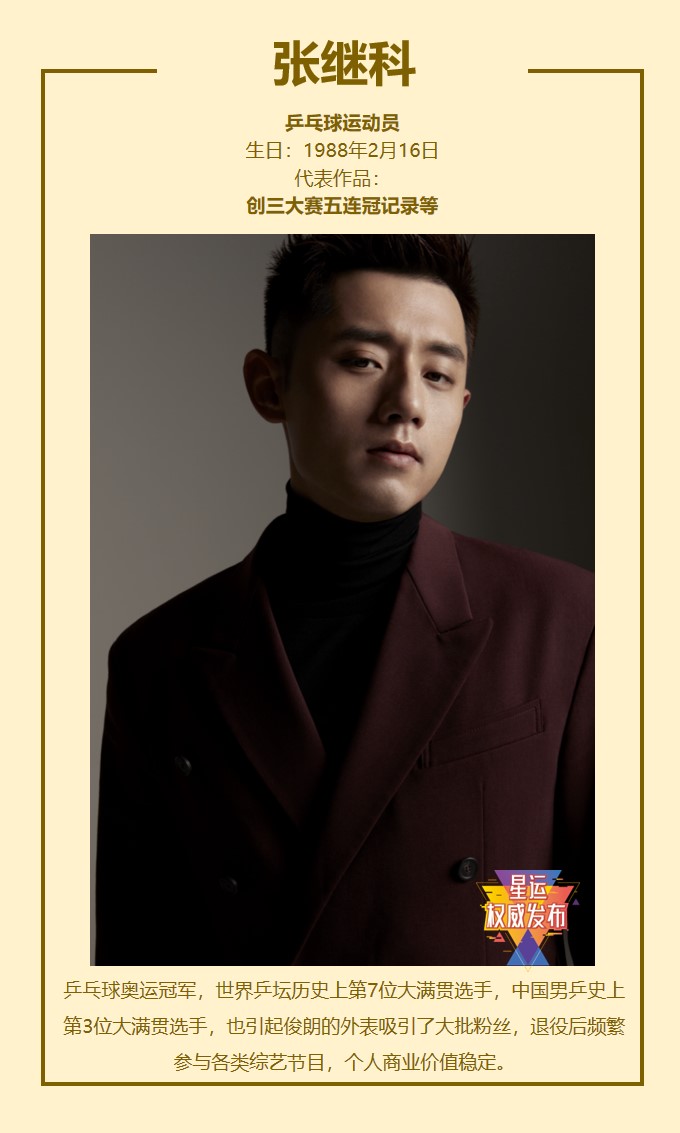 16. Li Xian: He became popular with his appearance in “Dear, Loved”, and was cordially referred to as her boyfriend in July 2019 by female fans. His popularity and commercial value continue to rise and remain high. The follow-up “Love Song 1980” will be broadcast. “Life Is Like First Seen” is more optimistic. 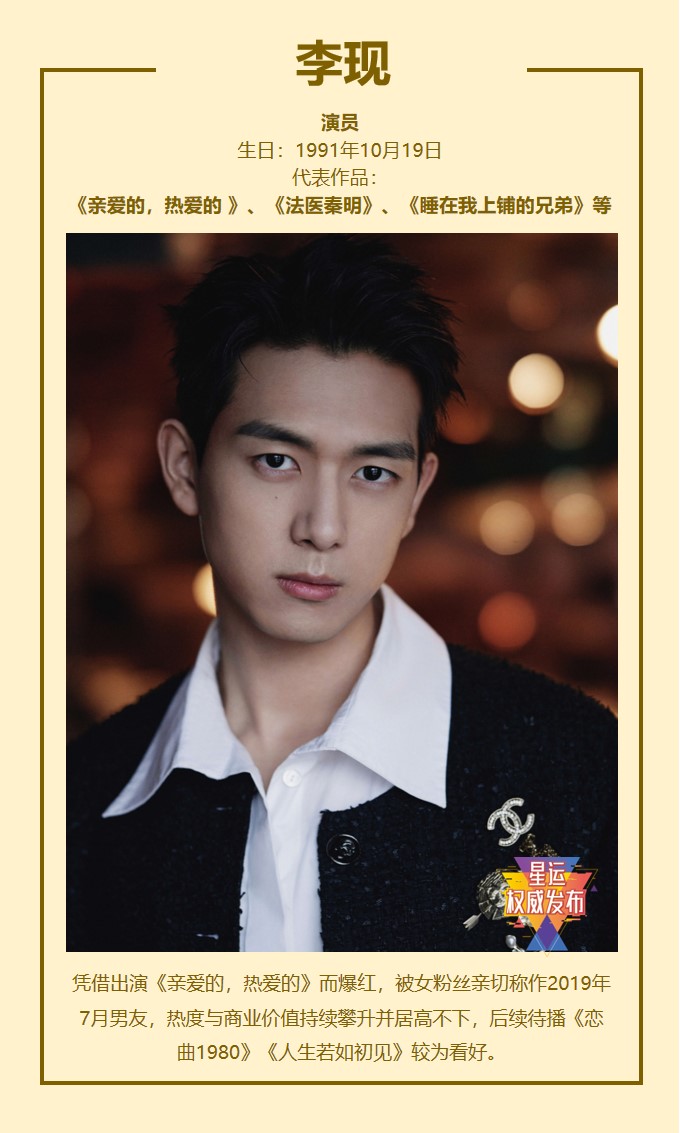 17. Jia Ling: She is unique in the comedy world. The degree of joy in variety shows has reached a state where she is almost silent and can’t help the audience. The audience’s recognition is high. “Hello, Li Huanying” has set a movie record. I look forward to it. Her follow-up works. 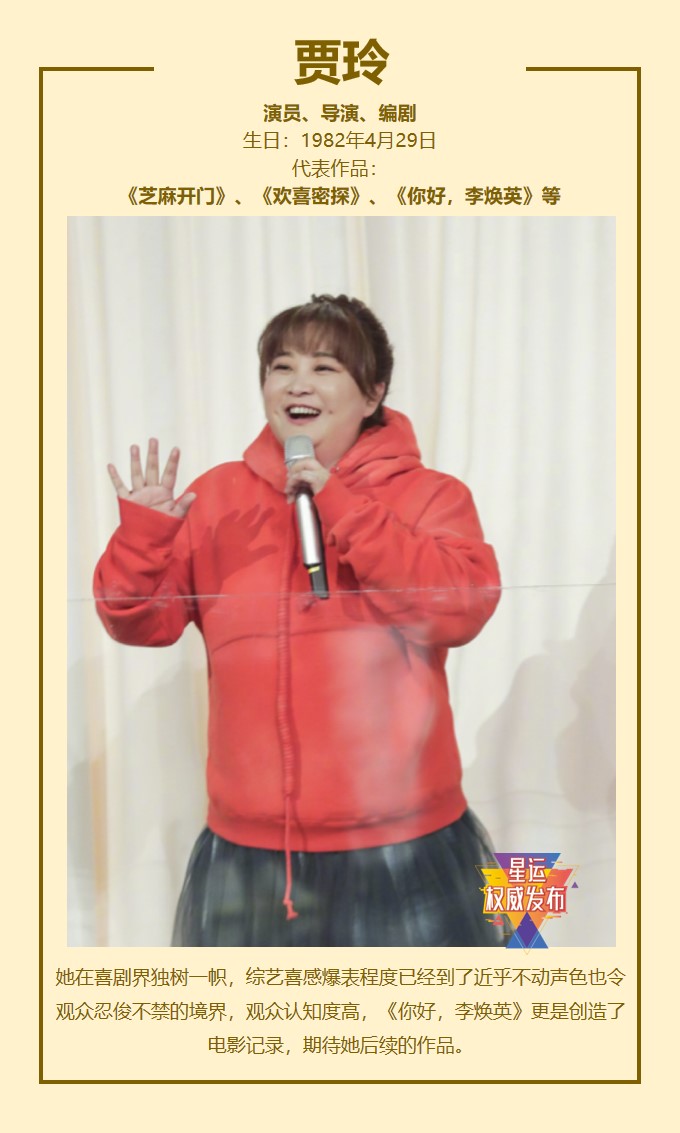 18. Li Yifeng: The national awareness is very high, the fan coverage is wide, the adhesion is high, the resources in all aspects are top, the commercial value is extremely high, the TV series “The Trumpeter is in place” starring in the Rocket Army recently is popular in. 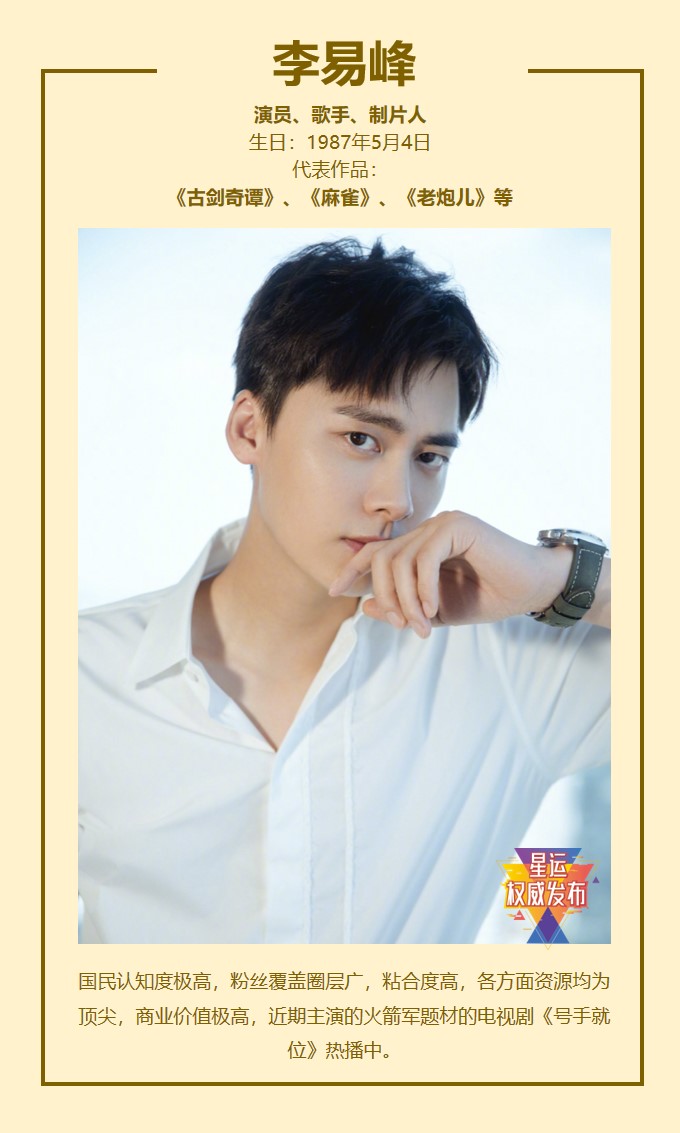 19. Zhu Zhu (Xiaohongshu): Film and television actress and host, shortlisted for the “World’s Most Beautiful Face” four times. With the oriental charm and natural and refined acting skills, he participated in many film and television works. Son-in-law, Da Qin Fu, and Elite Lawyer are highly acclaimed. Recently, he has been highly active in Xiaohongshu, and his makeup notes have been ranked first on the Xiaohongshu hot list, with great commercial potential. On broadcast: “Breathe Deep Together” To be broadcast: “Children of the Qiao Family” and “The Rebel” 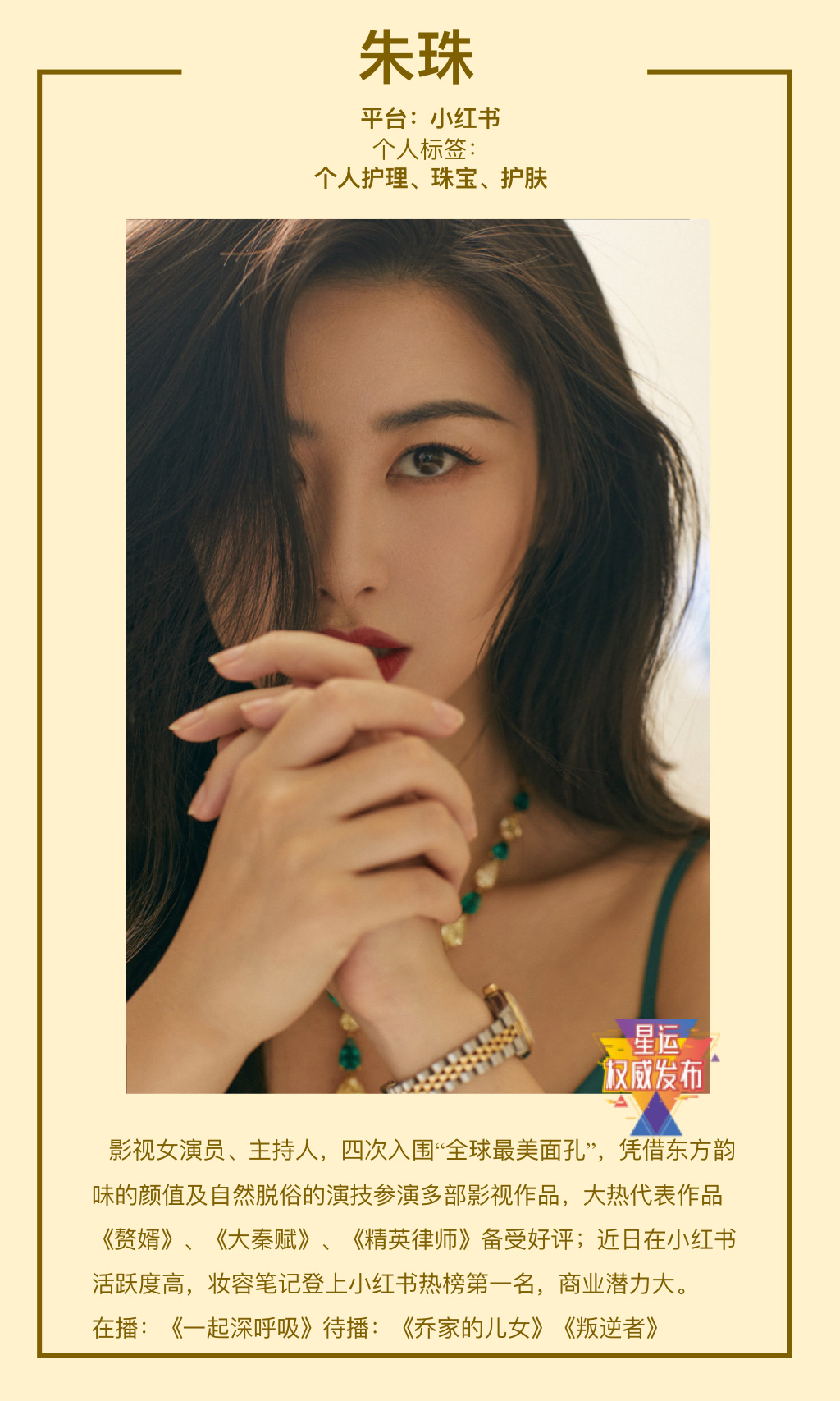 20. Dong Jie (Xiaohongshu): Film and television actress, conquering a large number of audiences with her superb acting skills in many film and television productions such as “The Family of Gold Fans”, “Ruyi’s Legend”, “Tiger Dad and Cat Mom”, and recently participated in a hot variety show “Sister Riding the Wind and Waves 2” has countless fans. The data on the Xiaohongshu platform is increasing day by day, with strong maternal and child attributes, and business cooperation is highly anticipated. To be broadcast: “Fighting Knives in the Snow” and “Goodbye!” Mother 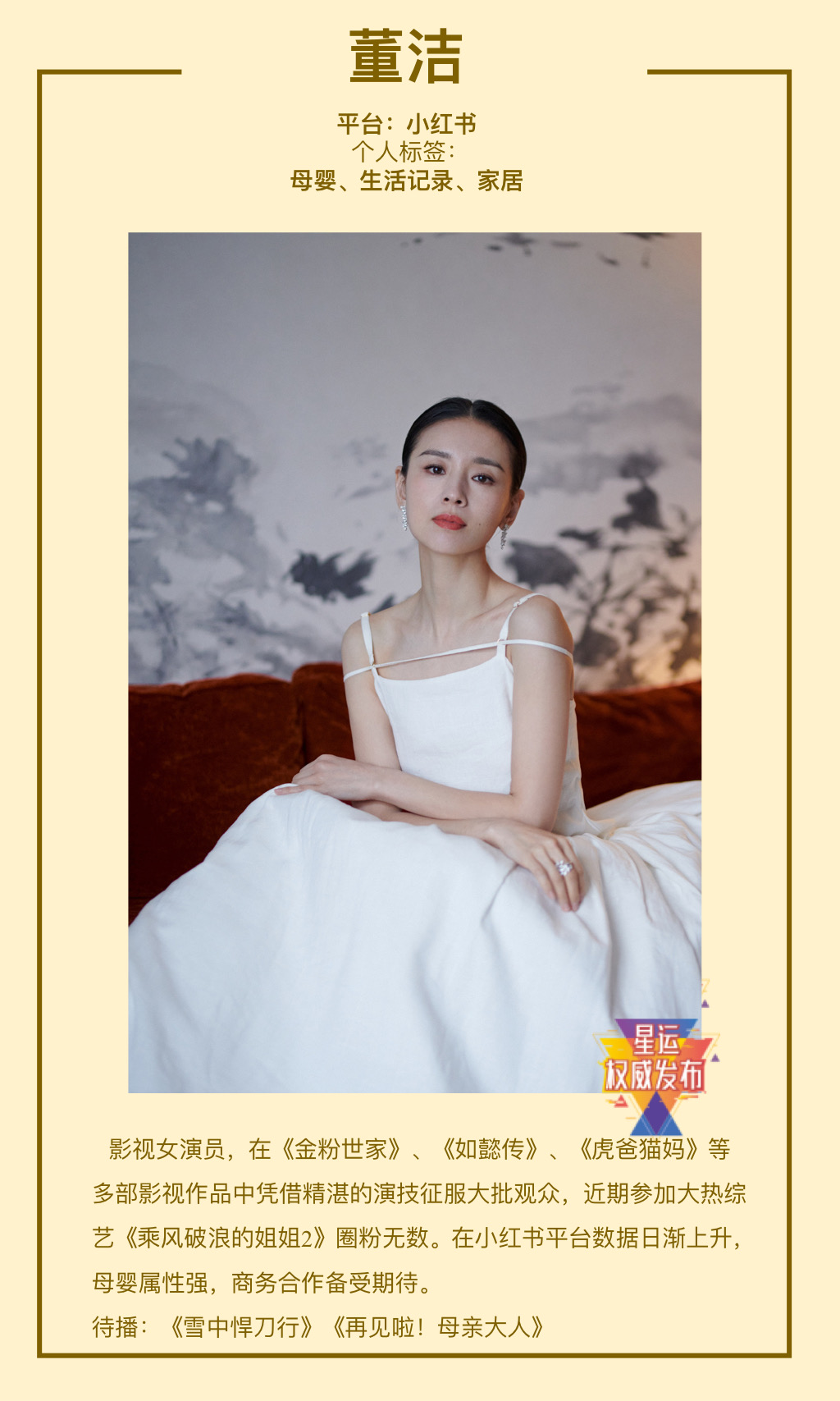 21. Lame Yoko (Xiaohongshu): A film and television actress, from a short video blogger to a highly anticipated actress, she has received great acclaim for her unique humorous style and lively and intense performance. On the Xiaohongshu platform, makeup notes are the mainstay, and the data is considerable. There will be a number of film and television works to be broadcast, with great commercial potential. To be broadcast: “Empress Liu Hei Fat” and “Jade House Spring” 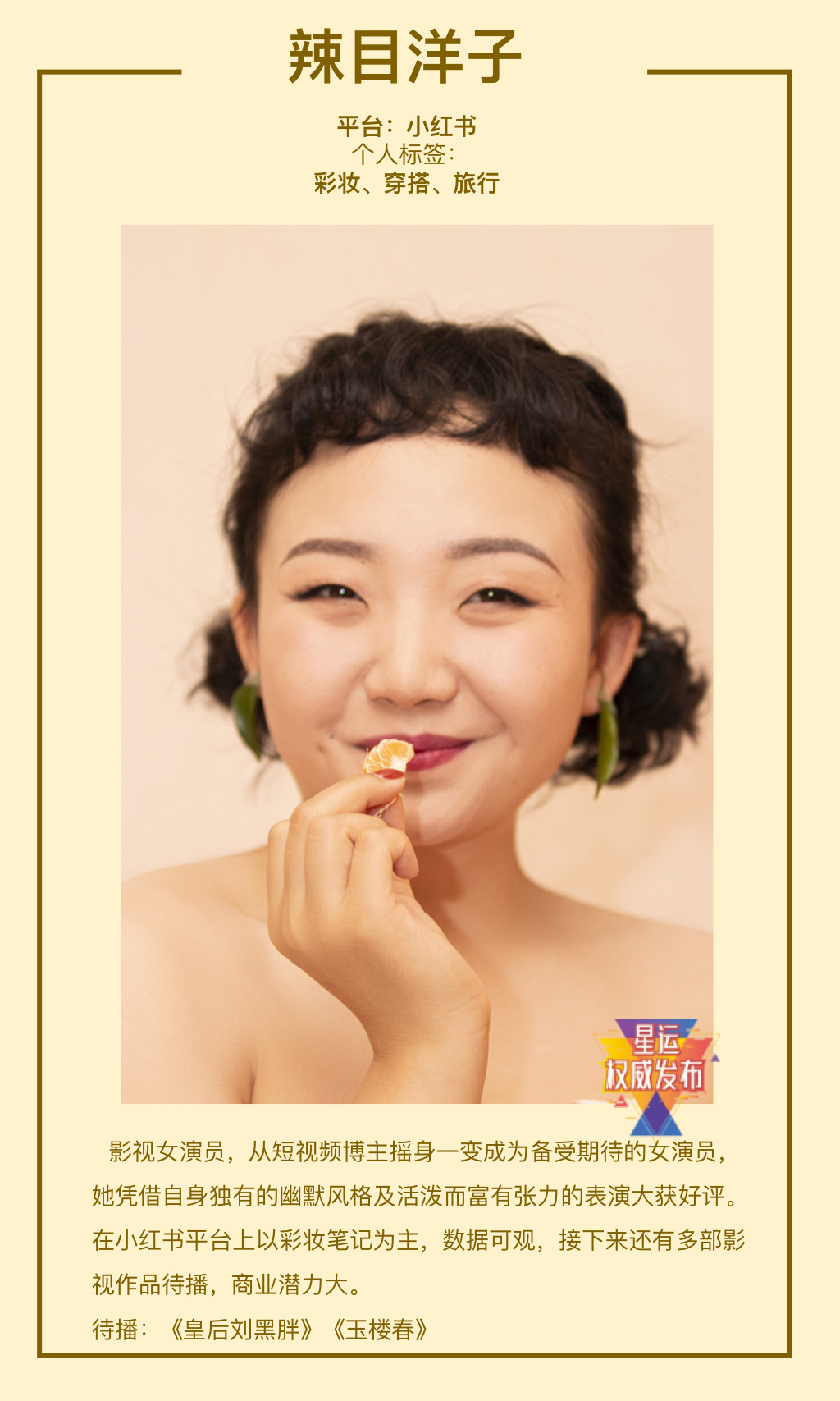 22. Qiao Xin (Xiaohongshu): Film and television actress, participated in many popular representative works such as “Langya Bang”, “Ode to Joy”, “Ordinary Glory”, etc. Her acting skills have been affirmed, and she will share and wear more on the Xiaohongshu platform. Take notes on makeup, beauty, and skin care, and often appear on the hot list of Xiaohongshu videos. The data is considerable, and the continuous exposure of film and television and variety shows is worth looking forward to. To be broadcast: “Yanyu Fu”, “Jade Louchun”, “Infinite Depth”, “The Creators” 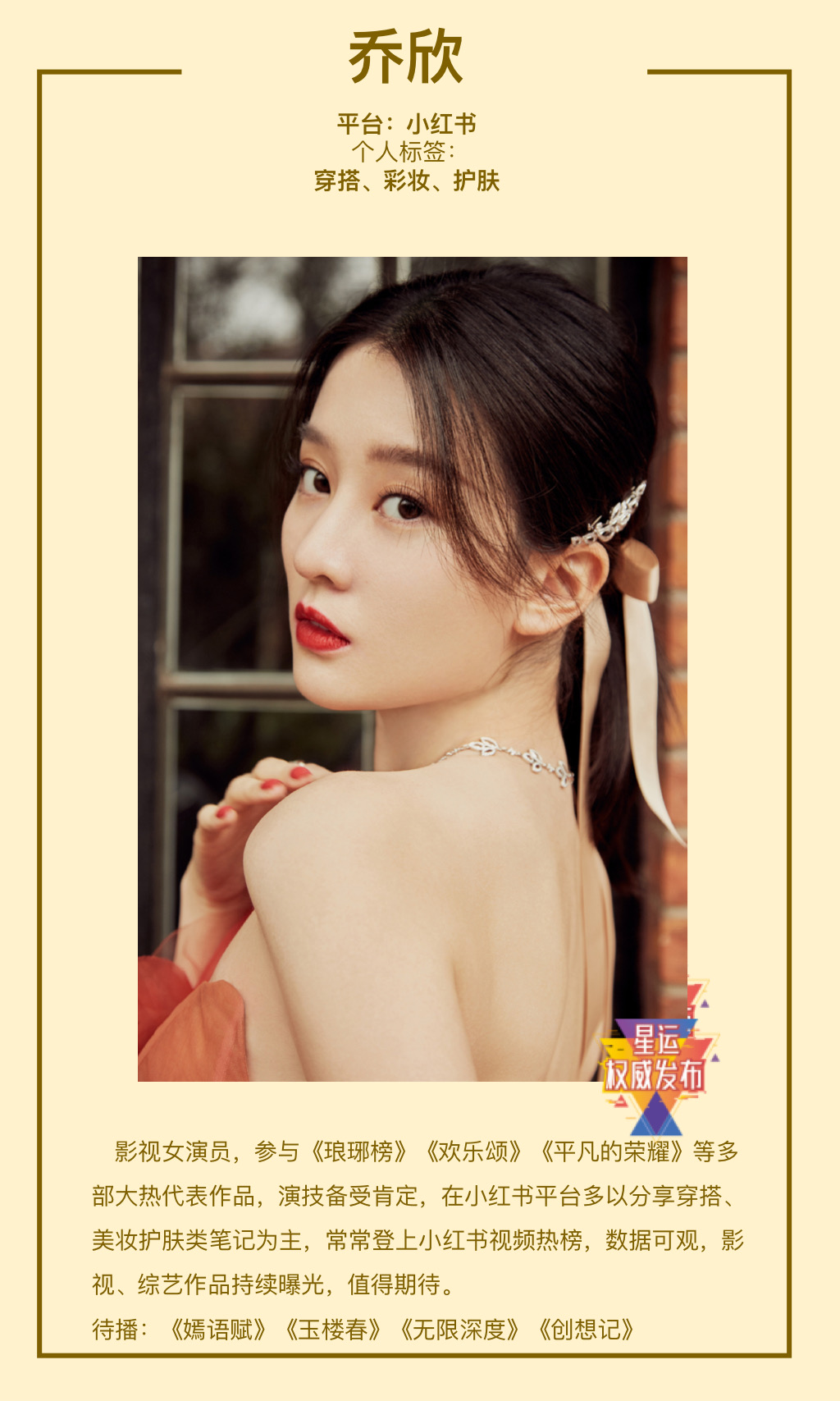 23. Zhong Liti (Xiaohongshu): Film and television actress, Chinese lady, became popular with “Legend of Mermaid” and was named the Asian sexy goddess; participated in the hot variety show “Sister Riding the Wind and Waves” to chase dreams through the waves; the attribute of Xiaohongshu platform to lose weight Exercise is the most, and the shaping training notes are frequently on the hot list of the small red books, and the ability to plant grass is strong. 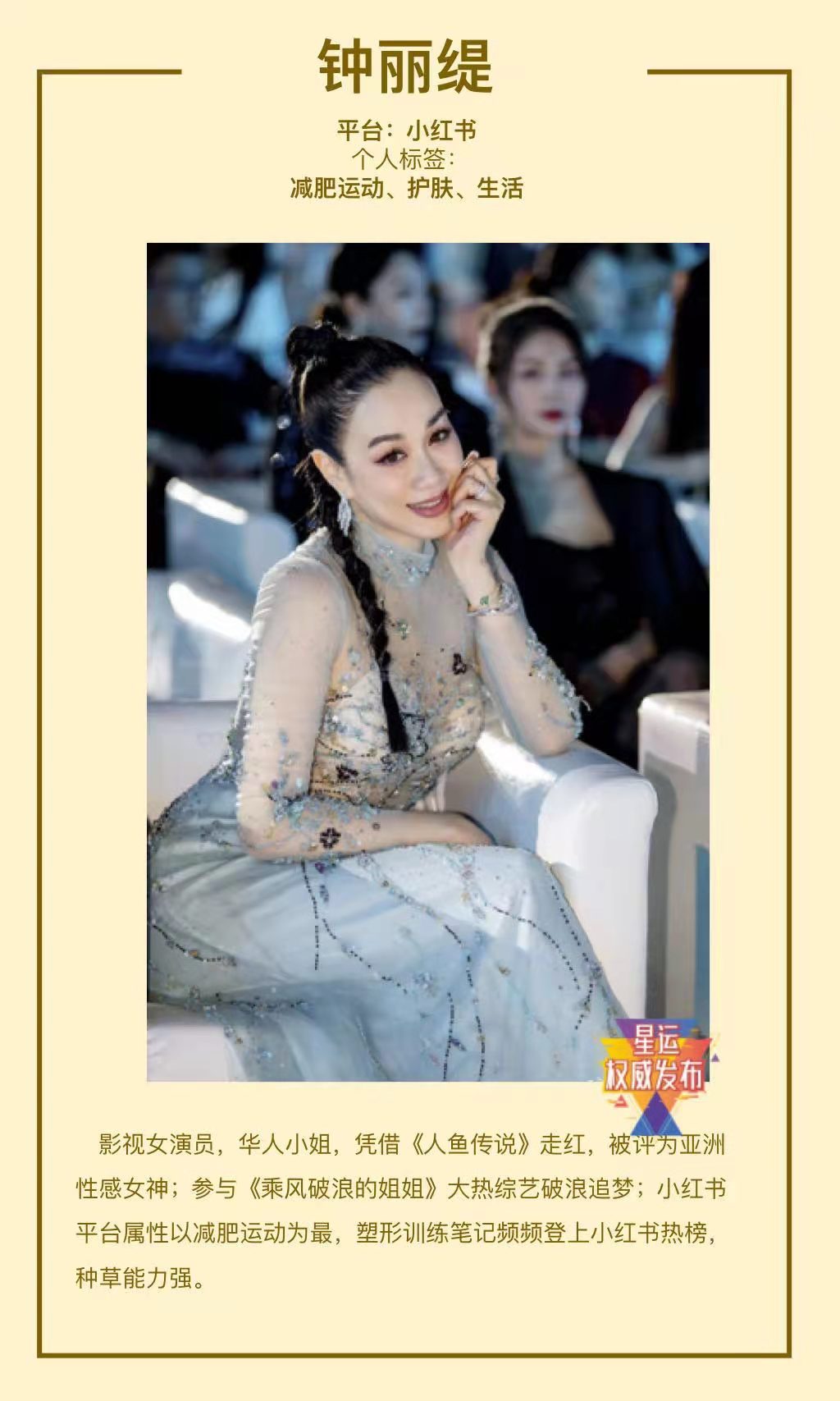 24. Meng Jia (Xiaohongshu): Mainland Chinese female singer and actor, former member of missA group. Last year, he successfully formed a group in the popular variety show “Sister Riding the Wind and Waves”, and gained a large number of fans. On the Xiaohongshu platform, it mainly focuses on sharing clothes, opening the box, and recommending notes of good things. A recent note of “Beijing Shopping Sharing” was posted The commercial value of the top three on the Xiaohongshu video hot list should not be underestimated. 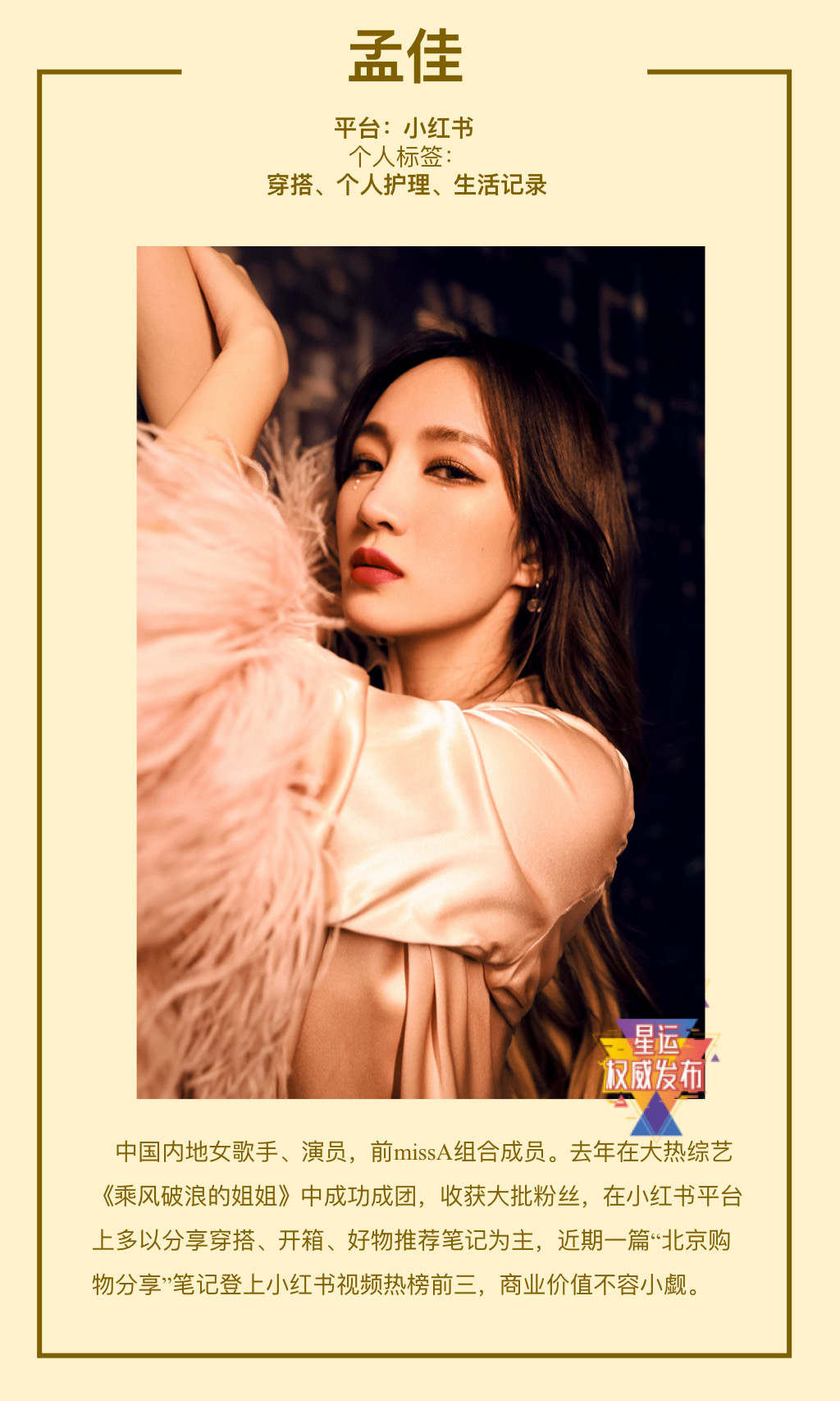 25. Nie Xiaoyu (Tik Tok): Nie Xiaoyu, the goddess of vibrato temperament, was born in 1996 and resembles Chen Huilin. She is a fashion designer who specializes in retro and Internet pop love songs. She became popular by singing classic songs, and her style changed. A large number of high-quality short films with a strong Chinese style. 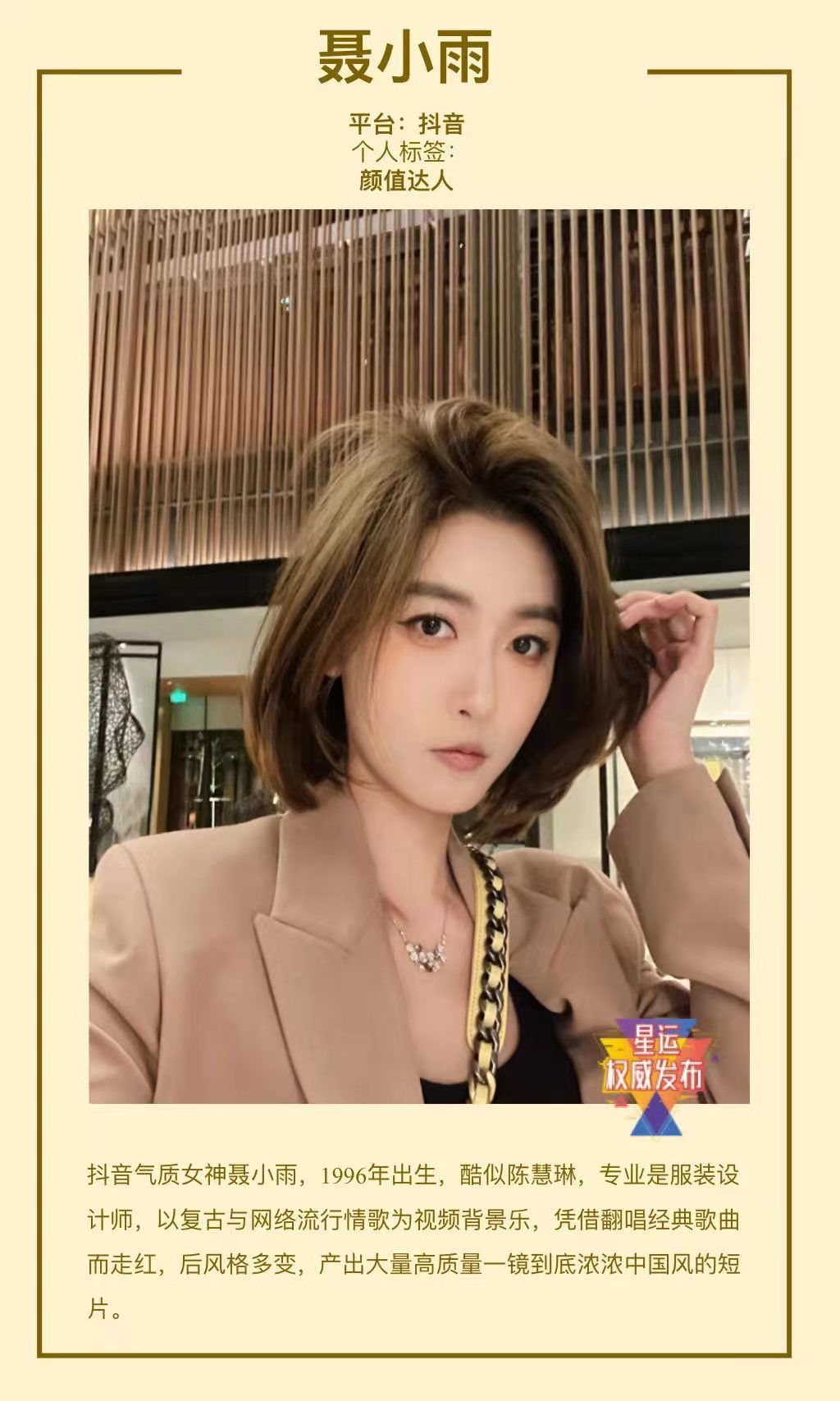 26. Wei Wei (Tik Tok): The single dog of the year represents Wei Wei. At the end of 18th, he began to shoot jokes. Later, he added elements such as self-black, straight man, sand sculpture tricky, single, etc., and boarded the main list of funny plots in one fell swoop, video The style is changeable and creative, and people can’t guess the ending. Do you love such a strange Weiwei? 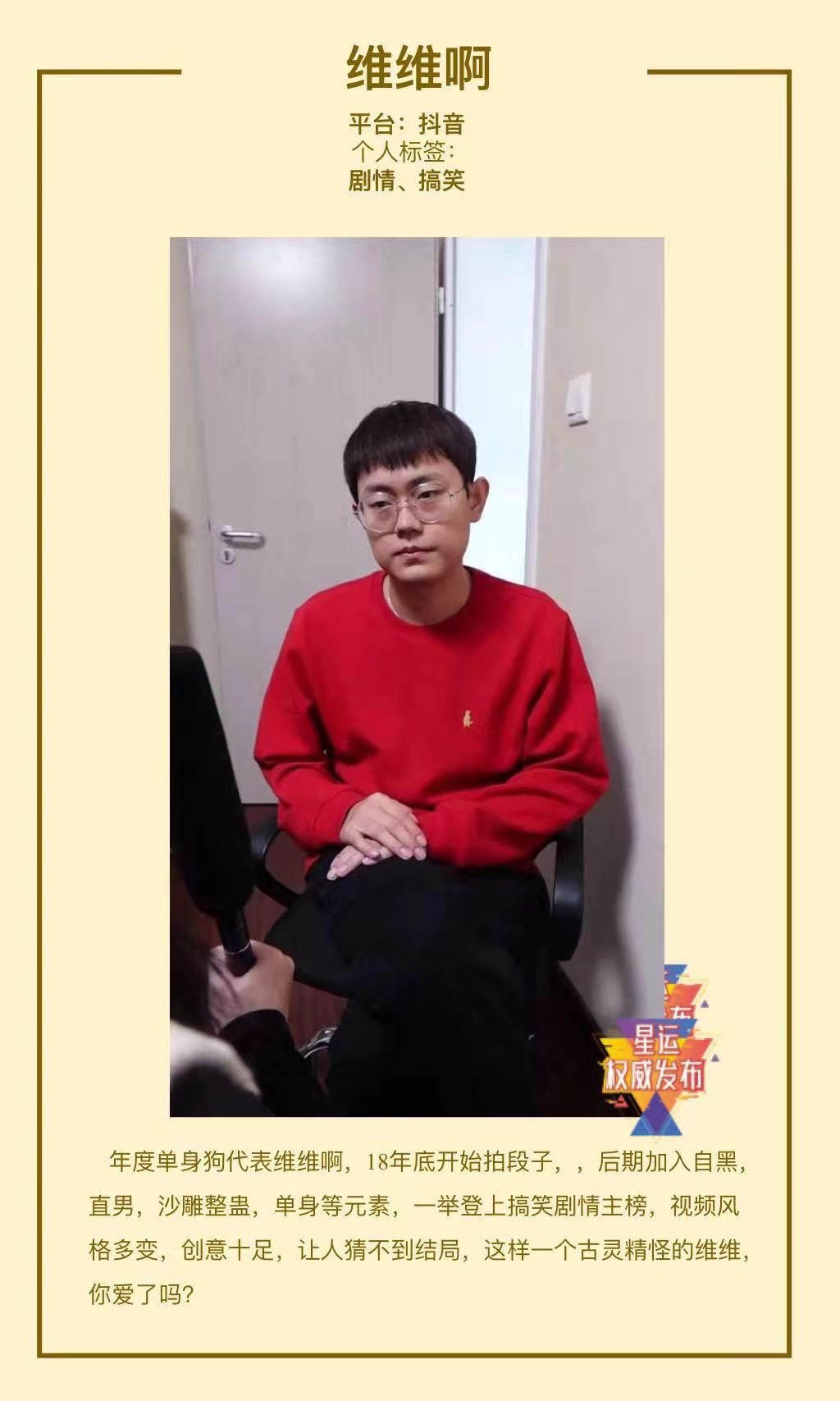 27. Lin Wanwan (Tik Tok): As expected, the school girl of the Internet celebrity senior and her girlfriend is also an official announcement. The first video released and co-produced with As expected is well known by many netizens. She has gained more than 2 million fans a month, and she has always maintained a sense of mystery. , Hasn’t shown his face so far, has a good figure, and has a sweet voice. Are you curious? 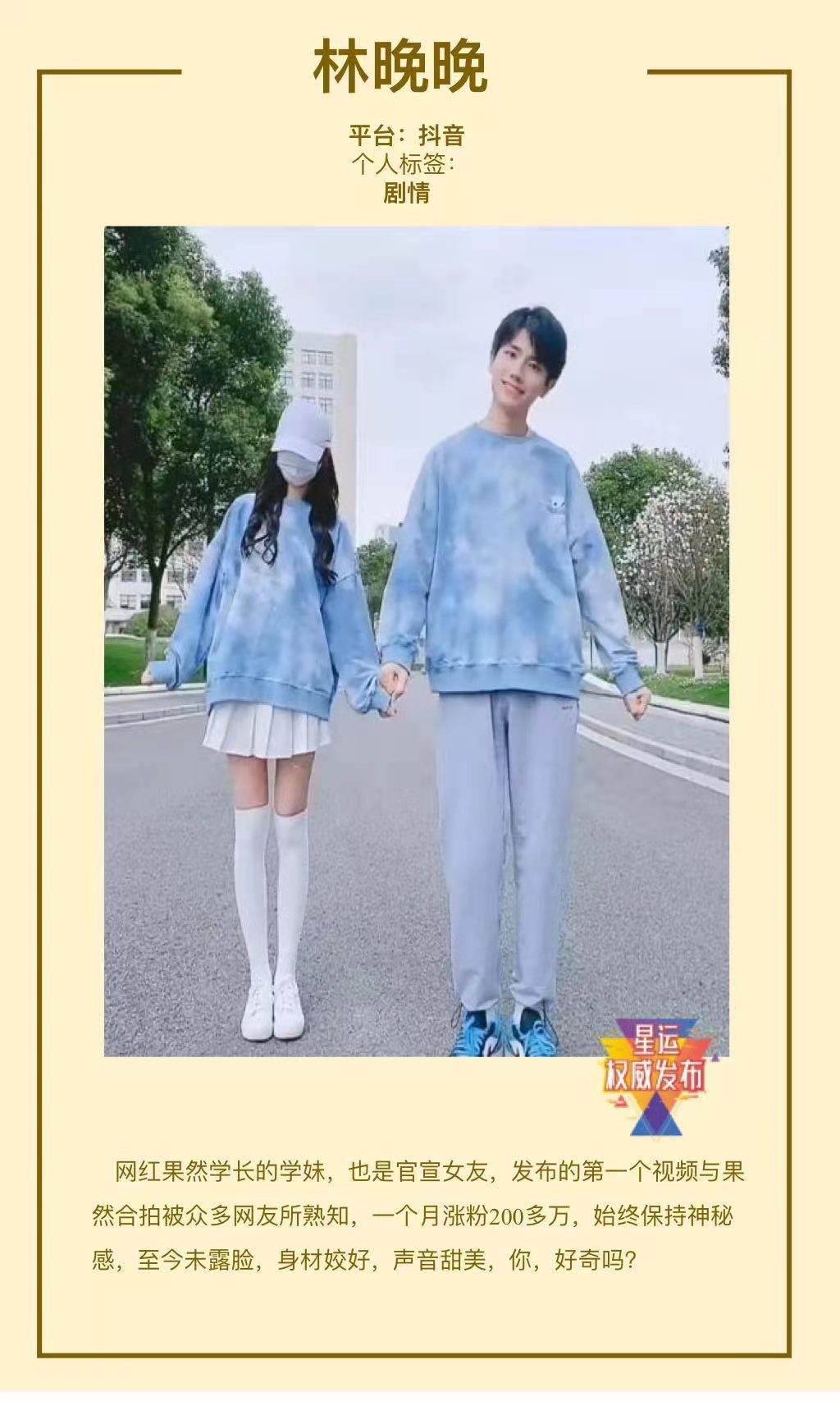